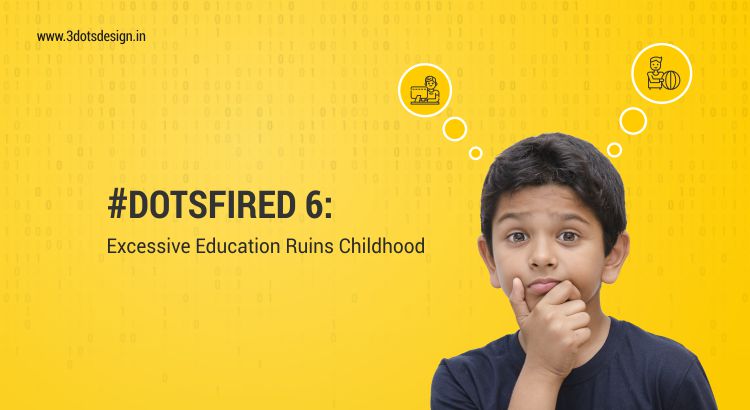 Who would have thought that the world would have turned upside down in such a way that 6-year-olds started coding and 26-year-olds created fantasy cricket teams on an app? Well, this topsy-turvy world is what we are living in today and that’s where all this, so called, “innovative ideas” are born. Our newest #DotsFired will be all about speaking up to the wider scope of problems that we are currently facing. It’s not depression. It’s not political propaganda. It’s about giving the right kind of education to the future generation. What are we teaching them? It is said that children are not that good learners, but they are great imitators. They learn by seeing what their elders do at home. They learn how to talk to people. They learn how to confront challenges looking at how elders react in a tough situation. This blog would be all about giving children what they truly deserve – a memorable childhood.

Children, of course, are born talented. It is until they start going to school and begin to learn all sorts of stuff. Schooling is one part of education, not the entire education itself. There are some life lessons that cannot be taught or learnt in a school environment. Take the greatest example of Sushant Singh Rajput. If education was so important, he’d have been sitting in the parliament today as the Education Minister reforming the country’s system. But, let’s not get carried away. Let’s talk facts.

The new National Education Policy (NEP) 2020 of 21st century puts the 34-year-old National Policy on Education (NPE) six feet under. NEP 2020 aims at achieving 100% Gross Enrollment Ratio in school education by 2030. So, does this mean that a newborn has to enroll for the IIT/JEE coaching classes even before the umbilical cord is cut? Relax! Let the kids live.

The Japanese Way – Manners Before Knowledge

The reason why the world envies the Japanese education system is simple – they put manners before knowledge. The students in Japan don’t take any exams until they reach the age of 10. They just take trivial tests. The primary belief is that the goal for the initial 3 years of schooling is not to judge the kid’s knowledge or learning, but to imbibe good manners and to develop their character. Probably what most of the adults in India haven’t learnt (or been taught in schools) in their childhood, and wish to pass on this toxic legacy to the future generation as well. So, why pressurize our children to sit at home and code, when all they should be doing is get out of the house and play. The current situation being an exception, parents are resorting to keeping their kids quiet by handing them a smartphone, which they think can solve all problems. Well, we’re sorry to burst your bubble. IT DOESN’T.

For instance, let’s say your kid has downloaded WhiteHat Jr. app and is learning to code and create an app. You are gravely mistaken that WhiteHat Jr. will make them a flawless genius. There are rare cases where a child has a brain like a supercomputer and can learn about 700 coding languages. Otherwise, WhiteHat Jr. is simply a ‘templated’ app where the kids have to learn about complex subjects such as game development, machine learning, space technology and whatnot just by using the drag and drop feature and editing the functions as suggested by the teachers online. If you think we were the victims of pressure that our parents put through to score 70% in board exams, imagine the plight of kids who want their 6-year-old to code and break the record. Give them a break!

Why is that you get to create a dream team on Dream11 and feel like a kid again? What about actual kids? Why don’t you code your way out of it? You may have all the pros to quote, but when someone says it is gambling, you would smartly share the link of the legal page and tell them it is a ‘game of mere skill’ and the app is exempt from the provisions of the Public Gambling Act, 1867 (PGA). Well, if that’s the case. If it is a ‘game of mere skill’, and kids who can code are skillful, it should have been open for 6-year-old kids as well. Why does the eligibility of playing on Dream11 say that the contest(s) are open only to persons above the age of 18 years? That’s quite a twisted tale, isn’t it? We’ll leave the Pandora’s Box open.

3 Dots Design believes that every child deserves to live their childhood with a perfect balance of academics and extra-curricular activities. Teaching kids the important life lessons, is not always the responsibility of the schools or apps. The parents need to invest time as much as they invest in their work. In the end, the children will always remember the people they played with and teachers who taught them, and not the toys they played with or fancy clothes they wore. The ultimate battle between education and enjoyment ends when children find them both in one place.