History of advertising in India 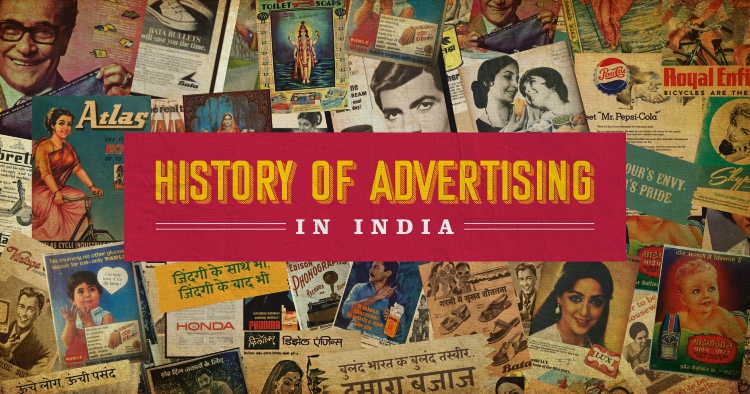 Advertising as a profession dates back to ancient civilisations and has rich history, although the forms of advertising may have changed over centuries. As an integrated mainline and digital advertising agency, we at 3 Dots Design felt that while everyone discusses on the future of advertising and marketing, we don’t hear much being talked about its past. So let’s take a little trip down the memory lane to discover the remarkable journey of the growth of advertising in India!

As languages and written forms of communication developed with invention of paper in China and papyrus in Egypt, sales messages began to be displayed as posters. After the industrial revolution in the United Kingdom, advertising slowly began to emerge as a veritable industry itself. The first brands as we know them today were actually a category of advertisers and patent medicines were a big thing. In fact, Horlicks becomes the first ‘malted milk’ to be patented on 5th June 1883! As a part of the British colony, India was not far behind in the developing sector that was advertising and marketing.

Traditionally speaking, Indian Advertising can be traced back to the hawkers who used to call out their wares using clever messages and slogans, right from the days when cities and markets first began. The history of print advertising in India has its roots in classified advertising. Ads appeared for the first time in print in Hickey’s Bengal Gazette, India’s first weekly newspaper.  To ‘advertise’ meant merely to ‘inform’ until the end of the eighteenth century, and the early newspapers and periodicals announced births, deaths, arrivals of ships from England, sale of household furniture, etc. some journals like the Bengal Journal (first published in 1785) even offered to print government advertisements free.

It was not before long that persuasive copy that was specially written to sell and attractive visuals that appealed to the consumers began to hold sway, creating new professions like designers, copywriters, and even account managers! Two main events responsible for growth of Indian advertising agencies were: the Swadeshi Movement (1907-1911), which gave rise to indigenous industries, and the second, was the installation of first rotary linotype machine by the Statesman of Calcutta in 1907.

By the 1930s, several Indian as well as foreign advertising agencies had been set up in India. Some of the notable milestones that happened during this era include the launch of Dalda in 1939 by Lever’s advertising department – the first major example of a brand and a marketing campaign specifically developed for India, and the signing of Leela Chitnis as the first Indian film actress to endorse a product i.e. Lux in 1941.

By the 50s, Radio Ceylon and Radio Goa became a media option, paving the way for radio advertising as we experience it today. But it was the swinging sixties that brought a creative revolution. The legendary slogan of ‘made for each other’ was coined for Wills Filter Tipped cigarettes, then launched and positioned as filter and tobacco – a match made for each other. While cigarette advertising faces several restrictions today due to health concerns, the caption still endures, showing the power of effective advertising and copywriting. Some of the biggest advertising superstars of the yesteryears flourished during this era, such Nargis Wadia, Kersey Katrak, Nari Hira and Frank Simoes, who was among the first Indians to set up their own advertising agency. The eighties had everyone glued to the television and Bombay Dyeing became the first colour TV ad and the older viewers can still remember Vicco as the sponsor of Yeh Jo Hai Zindagi! By the 90s, advertising had become pretty tech-savvy and the decade saw agencies open new media shops; go ‘virtual’ through websites and Internet advertising. 1993 also saw the birth of India’s only advertising school, MICA (Mudra Institute of Communications Ahmadabad). As the new millennium approached, India experienced a Media boom with the growth of cable and satellite. The print medium also saw an increase in titles, especially in niche areas. But the buzzword today is digital advertising. The internet has made advertising take on new formats and platforms, with social media sites dominating the markets thanks to their reach and interactivity. So what do you think the future of advertising will be like? Only time and trends can tell!