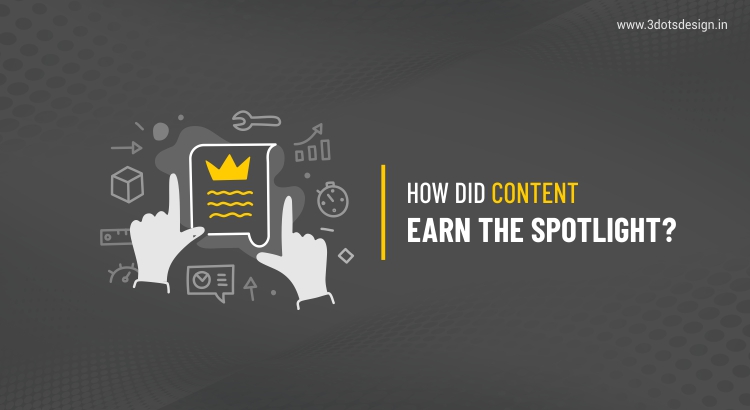 Speaking of Content becoming King in our previous blog, let’s talk about the conversation between a king and a spy that happened during the Civil War in the Marvel Cinematic Universe. It was during the signing of the Sokovia Accords when T’Challa said to Ms. Romanoff – “Neither of us are used to the spotlight”, and that’s what this blog is all about. How Content as King Earned its Spotlight without being used to it.

During the earlier days when content was just seen as content and nothing else, it did its regular breadwinning job of filling up the empty space with words and empty homes with daily essentials. Well, now as a King, it can do a lot more. Why did the pop culture reference of Civil War pop up in the context of content? Well, there’s a story behind it, too. Remember when content was part of a team (Avengers) and it did the job pretty well? That’s exactly what it was supposed to do. But, then, something happened, Ultron (Internet)! Nobody’s fault! And then, content had to be put in check because it was accessible to all. So, what did content do? It went solo.

Does anyone remember the old serial on Doordarshan called “Surabhi”? There was an episode where the hosts received lakhs of handwritten letters as answers to the contest they ran. It was sort of, the birth of content right at that moment. Later, during the era when people still admired reading magazines, Reader’s Digest did this thing called “Sweepstakes”. It was more of an engagement strategy that influenced people to keep subscribing to the issues for years. That’s how content slowly began to draw more eyeballs. We were given dummy car keys for the brand new Honda City and that was it. A well-written letter that said that we were one of the chosen few to be awarded the car, put us on Cloud Nine. These were the times before the advent of the World Wide Web.

The process of Content earning the spotlight started gradually with such small steps. Its role extended the limitations of print. It started gaining more ground on the digital platform as well. We started getting accustomed to SMS (100 per day) and communication began to alter the content’s dimensions. Then came Facebook & WhatsApp! BOOM! There was an explosion of data everywhere! Oops! Did we miss out on Orkut? Yes! It was like a stepping stone for us to reach Facebook. So, the challenges for content writing grew when people started expecting more from what they were already getting. We wish we could use the camera on our phones… Wish there was a map in it… Why can’t we see the people while talking to them? Why can’t we order food from home? Medicine and engineering are the only career options?

These expectations gave rise to content as the sole creator of opportunities. Stand-up comedians started becoming celebrities. Zomato & Swiggy became an alternative for food. Uber & Ola were a befitting reply to auto-rickshaw & taxi drivers arrogantly saying “Station nahi jaana”. And finally, “Netflix & Chill” became a substitute for “Night-outs” (you know we don’t mean to mention the right answer to this).

At 3 Dots Design Pvt. Ltd., we believe that content has earned its rightful spot at the top because it stayed relevant. If the content was still stuck in the era of letter writing and sweepstakes, today’s generation would have trashed content categorically and have invented something of their own. At 3 Dots Design Pvt. Ltd., creating content is one of the most passionate things we love to do for all our clients and we are reciprocated with an equal amount of energy. Here are some of the content that we created for our clients in the past that made an impact on their business. Read more about who we are and what we do on www.3dotsdesign.in