Brands & Branding: How much is too much? 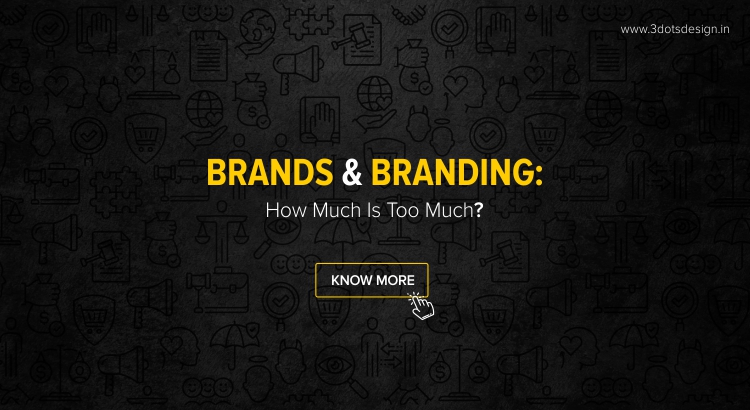 Quite often, people working in corporates tend to throw the word “brand” all over the place and abuse the power it possesses. Well, here’s a confession. We all have done that at one point in life. It became cringe-worthy when Akshay Kumar had a tête-à-tête with the antagonist in “Gabbar is Back” on the same topic of “Brand”. The word carries much more responsibility than just what people actually perceive it to be. This blog will tell you how much branding is too much.

Brand is something similar to this. It is a mark, symbol, name, word… anything that identifies a product or a service from the clutter. It is what creates, what they call, a “Brand identity”. Why did we say that the word is being thrown around? Here’s the thing – People who work on a brand (call them Brand Managers or Brand Management Team) often tend to use ‘brand’ and ‘sales’ interchangeably. This may not be universally true. Let’s remind you, this is not a #DotsFired blog. So, if any Brand Manager is reading this, we mean no offence. So, if the client comes up with a brief saying they want to do a “Brand” campaign and insist the advertising agency shove in all the product or service USPs saying that these points will help uplift the brand, they mean something else completely. Advertising and branding are termed differently for a very specific reason. The reason being – purpose.

Imagine if Marvel Comics sold only comic books. Would people remember Stan Lee for his mastery in comics or his cameos in the superhero franchises? You know the answer to this! Branding, in this context, is an offshoot of the fame that the comic gained over the years. The purpose still remains the same – to entertain the masses. But, when a multinational company tries to replicate the reputation of a distinguished brand, they leave the ‘purpose’ behind and focus on the ‘what’ rather than the ‘why’. That’s where most of the brands fail.

Take the example of Colgate! Initially, when they were adamant against the use of charcoal, they had to break the stronghold of Ayurveda in the Indian market. They launched an aggressive TV commercial that showed the cons of using a coarse, abrasive powder (Dantmanjan) to clean your teeth which was usually made from ayurvedic ingredients including charcoal. Colgate tried to convert those customers to using their toothpowder which was smooth and had a cooling effect.

In the late ’70s and early ’80s, the Indian version of Colgate’s ad portrayed a bare bodybuilder in a village asking his sister-in-law to bring him almond milk (doodh badam) and charcoal (koyla). The sister-in-law retorts with a surprising look, “Arey waah devar ji, badan ke liye doodh-badaam, aur daaton ke liye koyla? (Wow! You need a healthy drink for your body but charcoal for the teeth?)”. A VO then kicks in prodding the audience to switch to Colgate toothpowder because khurdare padaarth (abrasive substances) can deteriorate your enamels.

Cut to, decades later, Colgate launches an ayurvedic range of toothpaste which included charcoal flavoured toothpaste as well. Maybe that’s how Colgate got its name (Coal-gate) by creating a controversy out of charcoal (just kidding). Did Colgate over-brand itself? Is this what branding has become these days? The question still hangs in the balance.

To make a brand stand out, the purpose should be solid and every brand should take a stand and stick to it. Who knows, the customer might even consider your stance as one of the essential elements that would make your brand even bigger and better.

At 3 Dots Design, we believe that every brand deserves to be given its due importance. Be it in the market or be it in the minds of the customers. There has to be perfect harmony. Unlike the movies or the reality shows where the brand placement seems quite obvious (which would be covered in subsequent blogs), branding, on a global scale, needs to live up to just the purpose with which it has come to life. It’s not always about money, honey!