#DotsFired: Most Creative Campaigns Are Wasted On Digital Media 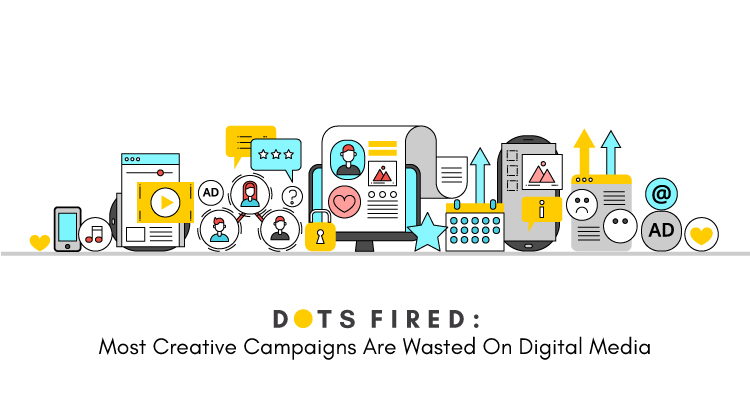 Here’s a topic that’s open for a healthy and a constructive debate (unlike the parliamentary ones) where we put out an opinion in public and they get to either support or counter it. So, shots (we mean, dots) have been fired. What’s your thought on this?

MOST CREATIVE CAMPAIGNS ARE WASTED ON DIGITAL MEDIA

It is a very common perception amongst any traditional advertising agencies that have been creating masterpiece campaigns offline, one after the other. They believe that “Print Media never dies” (rather, traditional media) and put their entire energy in crafting the best headlines and designing award-winning campaigns.

The millennial generation might be the ones who wake up and look at their “smart”phones first, but the most of them wake up to read a newspaper with a cup of tea. They still prefer reading magazines or a novel over kindle. The current pandemic situation has forced publications to dive into unchartered territories which were never their forte. They began to focus on areas such as AR-based content, interactive videos, online news, and more just to protect their readership and circulation. The lockdown pushed avid newspaper readers to download news apps and this led to an exponential spike of 453% in news app usage during the month of March 16-22. Around 40 local and national dailies went completely online during the lockdown.

When it comes to survival of the fittest, print publications with larger and more diverse revenue stream, broader circulation and bigger readership numbers will fight through the storm and rise victorious.

WHY DIGITAL MEDIA IS NOT THE RIGHT PLATFORM TO SHOWCASE CREATIVITY?

It is said that some habits either tend to change with time or by force. According to Indian Readership Survey (IRS) data released in the first quarter of 2019, print readership in India jumped to 4.4% to 425 million in 2 years. While Hindi regional dailies grew at 3.9% & 5.7% respectively, English newspapers saw a 10.7% growth. Though print still has an upper hand in making creative campaigns reach maximum eyeballs digital fails to do that to some extent. The digital impressions, even though they seem high in numbers, do not ascertain to reach the right target audience because the profusion of creativity on digital platform as compared to print is huge and dilated. If the showdown comes to readership versus impressions, the challenge is always a nail-biting one because the winner is not certain yet.

That’s the reason we believe that when it comes to creative campaigns, digital media treats them as yet another chunk of data. For instance, take the social media posts that are designed by Durex or Zomato. Most of them have great potential to create a definite impact in print, but they have created a niche in digital market. Though, in our opinion, some campaigns have their strong foothold in digital, some of the digital campaigns deserve a grand stage in print as well. What do you have to say about this debatable topic? Write to us, comment below or if you have stronger dots to be fired, reach us out on our social media handles.