The changing dynamics of Media 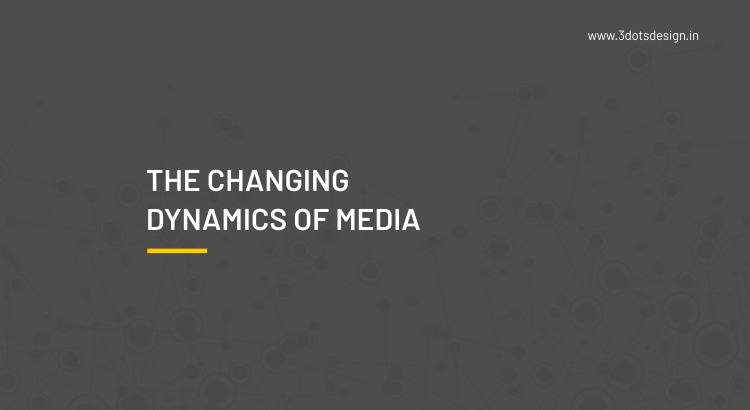 It’s due to the presence of Media that the world today stands as a ‘global village’. Communicating and connecting at such an ease with someone across continents was never possible before. Where mobiles, laptops, and computers have become a source of information for everyone, other facets of media like print still hold significant importance. With a rapidly evolving world, the dynamics of media are also changing rapidly. New ingenious ways are coming up to interest each one of us as to what the future holds for us. So, how did it all begin?

Media in the early days

The only form of media that existed till the early decades of the 20th century was print. The first major breakthrough that happened was with the arrival of Radio in 1920 and since then the journey of advertising has been upwards and onwards. Radio’s arrival in India in the year 1927 turned out to be a glorious opportunity for advertising and to reach people on a larger scale. Things gradually evolved with the arrival of televisions in 1959. India faced drastic changes in the 1990s with the arrival of cable television as it paved a way for mass communication and advertising.

The arrival of the telephone didn’t do much for advertising until they evolved into mobile phones. At first, when mobile phones had small black and white screens, various ways like SMS, Voice and flash messages for advertising were used. With the evolution of mobile phones, advertising got an unprecedented boost through big colorful screens as compared to the early days. Today it’s possible to reach a respective targeted audience through ingenious methods made possible by social media platforms and more. People are being shown specific advertisements at their favourite timings with the help of data and analysis. Today, we are able to reach the consumer at ease of time and place through their favourite screens. Apart from these, the latest technologies like VR are proving to be disruptive in a matchless fashion. Virtual reality is being used in real estate, education, hospitality and more. The kind of experience it offers is truly mesmerizing and is making a greater impact.

Media buying comes into play when a brand or product intends for paid marketing. In media buying, the aim is to identify and buy ad space on channels that are relevant to the target audience at the correct time, with the least amount of expenditure. Media buying is for both – traditional marketing channels like television, radio, print and also for digital channels like websites, social media, streaming. In India, since the arrival of social media platforms and other online mediums, digital advertising has been seeing exponential growth. Before the arrival of digital channels, major OOH options were – billboards, digital bulletins, posters, and hoardings. With each passing day, brands are regulating their expenditure and are investing more in digital media.

Impact of Digital Media on Advertising in India

The existence of Digital media has helped Digital advertising bubble out from traditional advertising which is now booming like never before. Today, where the pendulum is majorly shifting towards digital, the ways of marketing are changing at pace. Where the strongest pillars of media like print and television are doing well, digital is doing great with regards to other means. Brands are regulating their ad spend considering the results that digital media is offering.

At 3 Dots Design, we understand the ever-evolving game of media. Considering all the facets of advertising we craft strategies and campaigns that help our clients outdo their previous numbers of sales and performance. Here, at 3 Dots Design, we constantly keep on upgrading our methodologies to stay relevant with the current trends and tools for fetching the best results possible for brands associated with us.