Neuromarketing for the uninitiated! 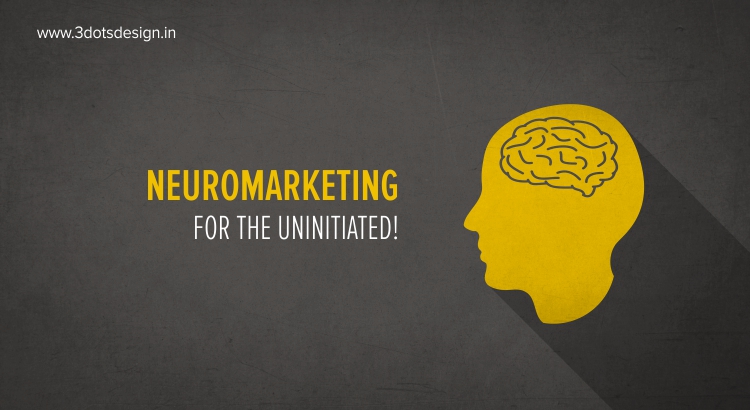 When the protagonist in Christopher Nolan’s masterpiece ‘Inception’ said, “Once an idea has taken hold of the brain, it’s almost impossible to eradicate…” every advertiser related to it. From being compared to a highly resilient parasite, bacteria, virus and even an intestinal worm, an idea has the ability to alter realities and sometimes even construct them. Today’s hero is – Neuromarketing. We would be discussing in length about the one with all the brains behind marketing, quite literally.

To define neuromarketing in simple words, it can be said as the psychological study of how the human brain responds to advertising and branding. For the uninitiated, neuromarketing is honestly not a new trend that has emerged newly in the industry. In 2002, a couple of business school researchers demonstrated that advertising, branding, and other marketing strategies had quantifiable impacts on the brain.

What marketers (intelligent ones) did was, they used insights derived from neuroscience, behavioural economics and social psychology, and implemented them on product design, branding and other marketing strategies to measure the effectiveness of advertising. All this sounds Greek & Latin without knowing how it’s done actually, right?

This is nothing like some ‘Lie Detector’ machine or a ‘Time Machine’ that we keep seeing in the sci-fi movies. Neuromarketing primarily uses these major tools for scanning the brain – fMRI, EEG and SST.

The fMRI (functional Magnetic Resonance Imaging) basically uses strong magnetic fields to check if there are any changes in blood flow across the brain. This procedure is administered while a person lies inside a machine that takes continuous periodic measurements.

EEG (electroencephalogram) can read the brain-cell activities with the help of sensors glued on the person’s scalp. You can think of ‘A Clockwork Orange’ as a crude example but that’s just the tip of the iceberg. EEG can basically track changes in activity over fractions of a second. One disadvantage is that it fails to pinpoint the exact location of the activity in the brain that can tell us whether it comes from deep, subcortical regions of the brain (where a spectrum of fascinating activities takes place).

The Steady-State Topography (SST) is yet another path-breaking technology in neuroscience used specifically for market research. It’s all about finding out what triggers a customer to buy or not buy a particular product or a service. This method aims at conducting meticulous market research that focuses on extracting conscious thoughts (much like Inception) by asking relevant questions through a series of surveys, focus groups or one-to-one interviews.

Neuromarketing is just the beginning

The science and technology that aids market research in advertising and branding is still in its nascent stage even after being more than a decade old. It is indeed an expensive way to tell the world that your company is capable to invest in a million-dollar worth of technology to understand the customers deeply. We would be speaking in length about the applications of neuromarketing and where is it heading in the subsequent article.

At 3 Dots Design Pvt. Ltd., it’s not just about creativity that sets us apart as one of the best advertising agencies in Pune. We are also known to be the best digital marketing company in Pune with our team of expert marketers and researchers. They are a dream team who can carry out the ‘Inception’ in our own 3 Dots way!