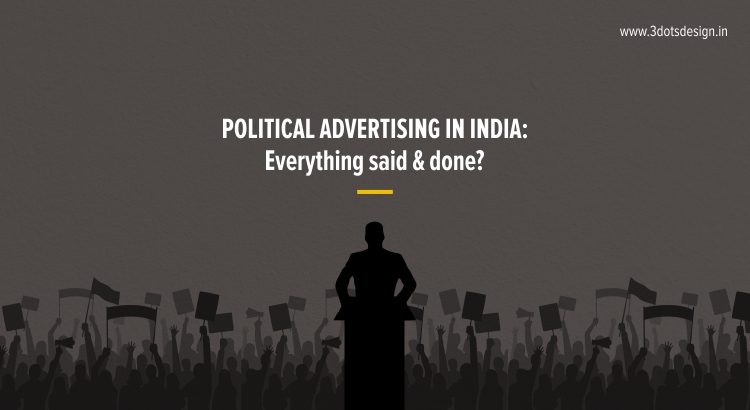 Talking about politics at any given time of the day (in today’s time) is nothing short of dancing on thin ice. Any sort of criticism (even though legal & valid) may be declared as a criminal offence. So, how can such a fragile subject be advertised? Well, that’s where creativity comes to play (rather comes into power).

When an advertisement or a creative piece of communication is crafted for a particular political party, candidate or representative, it comes under the purview of Political Advertising. Any other sort of communication that’s published by government agencies, be it public service ads, or political manifestos. Political advertising sometimes can also include information provided by the government.

Fun Fact: Political Advertising is regulated by the Model Code of Conduct, meaning, they too go through the rigorous regulatory process.

There’s no doubt that law is the penultimate power that governs every process. But, creativity in any category has to respect its boundaries. It’s truly fascinating to watch the big guns firing at each other and exhibiting their propaganda in unique ways possible. Some arrive at the parliament on a tractor, some protest on the streets hurling the most creative slogans at one another. The nation will surely want to know – where do they get such creative ideas from?

The Transformational Journey of Political Advertising

When there was no social media, no TV or the internet, politicians had to struggle quite a lot to become public figures. It all began as a lethargic effort in the early 1980s. The evolution of Political Advertising has happened mostly because of the advancement in the media – from larger-than-life-sized hoardings and loudspeakers to full-fledged IT cells. Political advertising in India had to undergo some serious metamorphosis to become an organised and professional way of approaching voters. The transformational shift from the erstwhile practice of sloganeering and propaganda to adapting branding and positioning strategies is quite a commendable journey.

That’s the reason “Abki Bar Modi Sarkar” was looked at as a creative campaign, rather than just a political campaign. The candidate himself was a “brand” and agencies took the challenge to promote the brand instead of promoting the party to which he belonged. There were three agencies involved in creating the campaign and the advertising minds ensured that the campaign reached the audience in the right manner. Political Advertising was already onboard The Growth Arc.

Rise of a new category in advertising

Political Advertising became prominent because the political organisations were able to effectively communicate using the latest technology. Also, with the growing number of voters, the competition within the political parties became even more cut-throat (pun intended). The media has made an instrumental contribution in shifting perceptions and voting behavior. The “Jaago Re” campaign by Tata Tea is the epitome of advertising on voting. Political advertising has been a mix of candidates who brought hope and those who were an utter disappointment. Nevertheless, it has given birth to a new category in advertising and ad agencies (even politicians) across the world are looking up to the Indian archetypes. Even Donald Trump mimicked our Prime Ministerial slogan and recreated his own “Abki Bar Trump Sarkar”. Now that’s what we call, setting an example (at least in terms of advertising).

At 3 Dots Design Pvt. Ltd., we believe that everyone has the right to market themselves. By using the right communication tools, right media at the right time, political advertising can flourish on a very progressive plane. Being one of the best ad agencies in Pune, we take pride in creating an example in terms of creativity, strategy & designs that surpass the industry standards of quality. After all, a leader always hires the best people to make every communication stand out and speak for themselves (without any loudspeakers).