Is the Indian version of Shark Tank a sham? 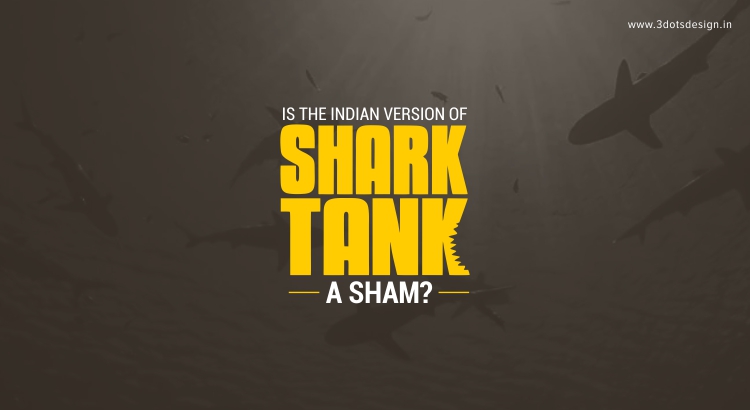 Everyone is talking about the Indian version of Shark Tank these days. Only a few seem to be talking from a business perspective, but the rest of the world is glued to the memes that are becoming more popular than the actual show. Is there something that the Indian television industry is missing? Are they using the same ‘Roadies’ formula to it? Is it becoming yet another daily soap ‘Scripted Reality Show’? Guess, we’ll find out soon enough. This article is all about questioning the format of the reality shows that are being adapted from overseas.

Not all Adaptations Work

Yes! When we talk about the recent reality shows on Indian television, most of them seem to be adaptations of the US or the UK. Only a handful of them such as – Who Wants To Be A Millionaire, Big Brother, American Idol, America’s Got Talent, MasterChef and a couple more, were able to create some authentic Indian content. Currently, some of these shows are running 10+ seasons and that proves the kind of content we are consuming on television. Now, let’s look at a few adapted shows that tanked miserably.

Firstly, Indian television ruined the magic of F.R.I.E.N.D.S. by creating a rip-off called ‘Hello Friends’. It didn’t stop there. They tried to recreate the popular kids’ show ‘Small Wonder’ and make ‘Karishma ka Karishma’. As a remake of ‘Fear Factor’, ‘Khatron Ke Khiladi’ still tried its best to stay up to the reputation of the original, but somehow got lost in transit. The titular remake of ‘The Office’ was a dud, the remake of ‘Moment of Truth’ into ‘Sacch ka Saamna’ was an utter failure, and ‘The Weakest Link’ made into‘ Kamzor Kadii Kaun was quite literally the weakest one, ‘Are You Smarter Than A 5th Grader?’ turned into ‘Kya Aap Paanchvi Pass Se Tez Hain?’ was quite the dumbest one…  The list of copycats is endless. If we compare the ones that worked and ones that didn’t, the latter seems to be on a higher side, because understanding the audience wasn’t something the producers did primarily.

Talking about today’s ‘Remake Generation’ of Indian entertainment, Shark Tank India is recently in news for all the good, bad, right & wrong reasons. The show has become the butt of all jokes on one side, breaking the internet with a memefest, and on the other side, kids are having conversations about ‘entrepreneurship’ and ‘equity’ with their parents, which is also a good thing. The show’s judges – Ashneer Grover, Aman Gupta, Anupam Mittal, Namita Thapar, Peyush Bansal and Vineeta Singh have become instant celebrities given their ‘phenomenal’ entrepreneurial background.

The question people were asking was – is this show for real or is it scripted, just like the rest of them?

For a show that has been tempting bright minds and entrepreneurs across the nation, who understand what goes into establishing a company ground up, are educated enough to believe that the show is not scripted. One of the participants actually revealed that the teams conduct a series of dummy pitch presentations before proceeding with the final shoot. Also, the creative team at Shark Tank India assists these entrepreneurs to enhance their pitches. After all, the ideas that are presented are polished in such a way that the product/service is in the spotlight. The judges (Sharks, as they are termed) are totally unaware of the entrepreneurs who would be making a pitch the next day.

With more than 60,000 participants on the show and 60+ successful pitches, Shark Tank India is surely in for the long run. The first season of the show lasted for 30 episodes hosted close to 67 startups won the funding of about 41 crore rupees. So, if someone still questions if Shark Tank is a sham, they might probably be fishing for some new memes.

At 3 Dots Design, we believe that every new idea needs to be presented in a way that the audience understands its importance. Be it for a new pitch presentation for a client made by us, or a new business pitch presentation made by entrepreneurs, when it comes to presenting ideas, the best one always wins. Being one of the best creative ad agencies in Pune, making pitch presentations (which was covered in one of our prior articles) is one of our fortes which translates into a productive business deal. If you think our creative & strategic expertise is worth pitching to your business, you can touch base with us at contact@3dotsdesign.in