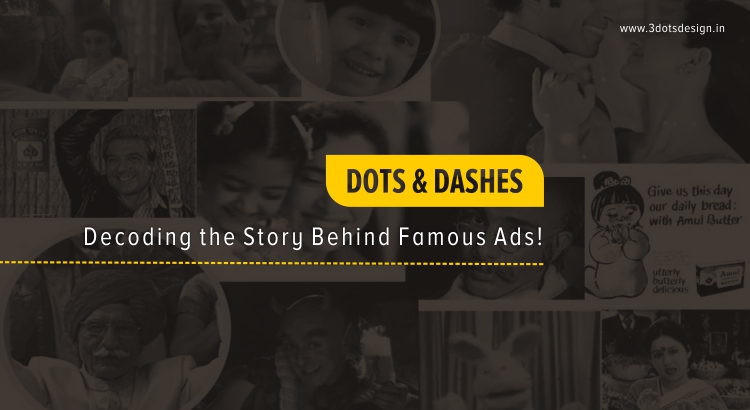 Advertising, these days, has become more of storytelling than simply a way to promote products or services. Sometimes, we get so engrossed or attached to a commercial or an ad that we start humming those tunes even in our sleep or while we are stuck in a traffic jam and our minds wander off into random thoughts. As irritating or as catchy as they are, these commercials have surely made their place in our minds and hearts in a way. This article would attempt to decode the story that went behind creating some of the masterpiece commercials.

From switching channels on TV to skipping ads on YouTube

If given a choice, commercials are something that we are do not want to see at any given time of the day. There are also a few commercials that make you forget the remote control or the mouse. That’s the job of an advertiser to ensure that it’s always the latter that happens often. From the Television Era to the Age of the Internet, advertising has witnessed a paradigm shift in terms of entertainment quotient, wit, creativity, social message, and so on. Here are a few commercials that have left a remarkable impact on the advertising fraternity.

It was the era of post-liberalization in the early 90s. The international, swanky and superior-packaged products were hitting the Indian markets and the local brands were facing the heat of being the downplayed, sober and simple ones. Amul was no different. It was just another ‘Indian’ brand that didn’t quite make a cut.

Amul didn’t need to do that either. It was a brand that was into existence even before the LPG (Liberalization, Privatization & Globalization) exploded economically (pun, intended). Amul took a rather contrasting step of not getting too much on the glamourous side of advertising and took a more ‘realistic’ approach. Being known for their quirky take on the current topics, Amul embraced the fact that it was an Indian (Swadeshi) brand. On the completion of their 50th anniversary in 1996, Amul released the Manthan ad film.

The ad featured footage from the 1976 National Award-winning titular film that had a stellar cast of Girish Karnad, Smita Patil, Kulbhushan Kharbanda and Naseeruddin Shah playing major roles. The film was technically produced by nearly 5,00,000 farmers of Gujarat and it rightfully earned an entry in the Academy Awards. Inspired by the story of Amul, the ad film showcased the milk cooperative movement that originated in a small village of Anand. Subsequently, it also resulted in the pioneering of the White Revolution by Dr. Verghese Kurien.

Most of the Gen-Y kids (popularly termed as the 90s kids) remember the saree-clad Lalitaji who featured in the erstwhile Surf Excel commercial. She educated the audience about the difference between ‘Sasti’ (cheap) and ‘Achhi’ (good) detergent powder and it convinced everybody that she was right. Maan Gaye Bhabhiji!

Almost after a decade and a half, when the global campaign for Surf Excel ‘Dirt is good’ was launched by BBH, the Indian version ‘Daag Achhe Hain’ was conceptualized by Lowe Lintas. There was no looking back for the brand from this point. This preposition changed the approach detergent ads were made. While the rest of the competitors focused on the product benefits, Surf Excel dwelled deep and emphasized the higher-order benefits. If you get dirty to make someone happy, then dirt is good (which can easily be cleaned by Surf Excel, was an underlying message).

The brand later took forward the same preposition to communicate various touchpoints on an emotional level which didn’t quite make an impact as the first one.

There are a plethora of ads that have brought a revolutionary change in the way we consume products, services and content. At 3 Dots Design Pvt. Ltd., we believe in crafting continuous creative communications that will be remembered for quite a long time. Being one of the best ad agencies in Pune, our team of dedicated artists and strategists works in tandem to ensure that every creative communication is laced with a touch of emotion that triggers the right chords with the audience. If you believe that we can deliver that level of creativity to your brand, visit www.3dotsdesign.in to know more about what we do or get in touch with us at contact@3dotsdesign.in