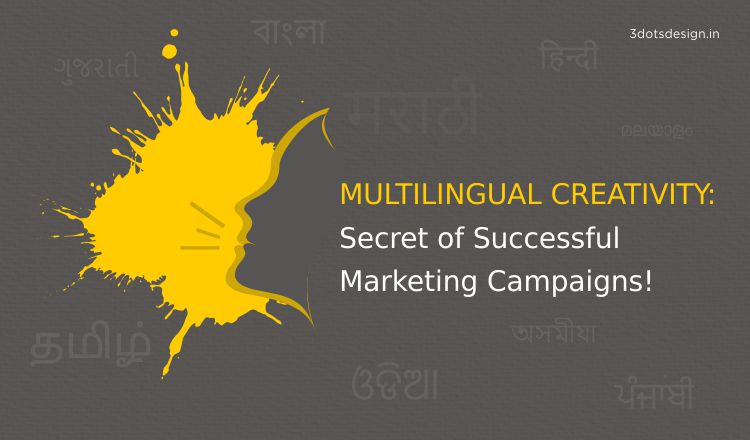 We’re back again, walking on the thin ice of ‘language’ across our nation. No! We’re not here to debate what our national language should be. Instead, we’re here, to promote multilingual marketing and how important it is in a nation that speaks diverse languages with rich histories of their own. Every language is indeed important and people speaking their mother tongue should take pride, but that’s quite preachy. This article today would elaborate on the need for localisation of global brands to trickle into the intricate parts of a diverse, cultural region.

The secret ingredient of ‘local’ success

Many brands have tried to change the culture of a culturally rich region that has and have failed royally. Take, for instance, Kellogg’s – they wanted to modernize the way Indians consumed their breakfast. Chilled milk & cornflakes, was their idea of an ideal breakfast. It might have been a hit in western countries, but the staple diet of Indians never matched their lifestyle. It could never replace idlis in the South, poha or theplas in the West. The Seven Sisters in the Northeast have a vibrant course altogether with a distinctive range of Manipuri Tan, Assam Jol Paan, Meghalayan Putharo, Naga Egg Shoap, Arunachal’s Khura, Tripura’s own Sweet Poha, and Sikkim’s Phale.

Kellogg’s eventually surrendered and introduced their own version of Upma. Now, that’s the power of localisation of a brand. This move was very much trolled by netizens after Anand Mahindra tweeted about it.

Fun Fact: The 80:20 rule applies here too because it takes approximately 20 languages to communicate with 80% of the world’s population.

Language is the real King!

Tracing the steps back to the blockbusters delivered this year, RRR, KGF: Chapter 2, have been one of the choicest few who have joined ‘The 1000 Crore Club’, but the point is not the box office collection, but the reason why they are blockbusters. When you communicate with the audience in the language they speak or understand, the effectiveness of the communication is augmented automatically.

There’s no shortcut to this! In order to establish a brand’s identity that is etched in the minds of the audience, it is imperative to read the pulse of the region. Marketers should really put all their efforts towards improving their reach to the target audience. Speak their tongue, learn their ways. Even Jake Sully had to take on the Avatar of a Na’vi and become Toruk Makto for the greater good. A brand’s recall value is boosted when it is given a personalized touch. Most importantly, the core aspect of developing a brand’s identity is creating a unified message. It is also necessary to ensure that the unified message doesn’t somehow get lost in translation because of the derailed content and social media communication (localisation) strategy planned by the company.

Marketing in regional languages beyond dubbing

If you closely look at it, there’s so much that marketing in regional languages can offer beyond just dubbing the content that sees no context to that region. It is important for the marketers to bring forth the importance of localisation along with some strong thought leadership that drives the business towards the expected destination. Only a Content Writer or a Copywriter would tell you how crucial a regional language can be. An ad that’s written for a B2B client in ABC state, doesn’t translate the same way to another B2B client in XYZ state. In a country where the language, and its nuances, keeps changing every 5 kilometers, understanding the language and the emotions it carries plays a vital role because language and culture go hand-in-hand. Marketers can simply dub a language, but it takes ages to build and learn a culture.

At 3 Dots Design Pvt. Ltd., we are proud to have worked for a diverse set of clients from different regions. With TMR Group, we have understood the consumer behaviour of the people in Telangana and developed our communication strategy accordingly. Being one of the best ad agencies in Pune, our forte has always been in creating meaningful, relevant and continuous contextual communication that strikes the right chord with their audience across regions. If you think your brand needs a ‘local’ strategy to spread its wings globally, you can get in touch with us at contact@3dotsdesign.in or visit our website www.3dotsdesign.in to know more about who we are or what we do.